Form: To perform the side lunge, begin standing with your feet together. Slowly take a large step sideways with your right leg. Keeping your left leg straight, your right knee bends in line with your ankle. Hold for 2-3 seconds. Push off your right leg bringing it back together with the left. Repeat on the left side. Keep your transverse abdominis activates, ribs to hips, and clasp your hands together to keep your shoulders back.

Note: You can also add resistance to this exercise by holding a medicine ball.

Form: Standing in the middle of the theraband, grasp the ends of the band in one hand. Lift you arm upward in front of your body to shoulder level. keep elbow straight and thumb facing upward. Hold and slowly lower, and repeat. Complete exercise on both arms.

A strong core is essential to well rounded fitness and decreased overall pain cause my muscle imbalances. Focusing on all the core components; shoulder stability, trunk stability, hip stability; including glute control and strength, balance and muscle control through movement.

To keep the class fresh and interesting we use a variety of techniques and equipment such as stability balls, BOSU balls, foam rollers, balance boards, etc. Including all components of fitness from cardiovascular endurance to more traditional strength training exercises to flexibility and range of motion work tone your entire body while building functional strength. This class is appropriate for  for all levels of fitness. 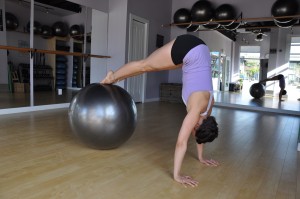 Hope to see you there 🙂

Exciting new research has been release regarding aging and muscle growth. IT used to be believed that after a certain age 79 plus that it was very difficult to build new muscle in fact virtually impossible. It is now known that it is not the fact; in reality and elderly individual following the same training program as a twenty year old will make the same muscular gains, thought they will take longer to adapt. What makes this research exciting is that it proves it is never too late to become active and start weight training. You will derive benefits whether you do it preventatively in your youth,  start in middle age, or even as a senior.

So dust off those running shoes and spandex, invest in some weights, get a trainer, go to the gym, and get going!

Check out reach physio’s blog for the biggest fitness trends of 2010. Very interesting.

Exciting news for those of you trying to reduce your waistlines…

Obesity is a prevalent public health problem associated with a number of severe health effects and those over 40 are at increased risk of being overweight. This risk may be due to a decrease in energy expenditure, reduced energy requirements, or an increased susceptibility to excess energy consumption in this stage of life. Increasing daily water consumption is widely recognized as a weight loss strategy, yet there is actually little data to support this. From studies that are available, it has been shown that:

The purpose of this study was to test the hypothesis that pre-meal water consumption would lead to greater weight loss in older overweight and obese individuals consuming a hypocaloric diet. The secondary objective was to determine if water intake before a meal to reduce meal EI is sustained after a 12-week period of increased water consumption in older overweight and obese adults.

To introduce some of the new techniques I learn while away at my course I am offering a special promotion. The first 4 people to email me who are in the Sqamish area will get a complementary functional muscular and motor pattern imbalance assessment this Saturday.

A study has just been published about the training effect on mucked tendons. When starting a weight training program initial changes in strength are displayed in the nerveous system; more
efficient neural conduction and mucle recruitment. After 8 to 12 weeks and consotstent loading the mucles would then hypertrophy or grow. However tendon tension increases which are necesary to be able to effectively lift heavier weights without injury takes 11 to 16 weeks. Therefore it is important to start gradulally to build up tension in the tendons for safe lifting.

The most interesting applications of the study are in regards to the detraining effect. After 1 month of not training the tendon becomes slack and you lose your gains, where as mucsle takes 2-3 months. If you stop training with weights you have to give yourself time to rebuild tendon tension when starting back up again to prevent injury.

Your core is more than just your abdominal muscles. Indeed your abdominal makes up the majority of the core; with the rectus abdominus, external and internal obliques and the transverse abdominus. Your lower back and glutes; maximus, medius and minimus also contribute to your core stability. DO not forget that the top of your quads and hamstrings also play a part.

There is a difference between core exercises and ab exercises. The former works these muscles in unison strengthening them as they work together (more functionally driven strength), the latter works the ab muscles itself, which is necessary to be able to maintain form in core exercises. Both are important in overall stability and strength.

And example of a core exercises is a plank, where as an ab exercise is a crunch.

Following is an editorial on the effects of emotions, specifically negative ones, on heart health.

Many Emotions Can Damage the Heart

Most people know that anger is bad for your heart’s health, but loneliness and depression affect your heart, too.

Volatile emotions like anger and hostility are bad for heart health. But studies have shown that some of the quieter emotions can be just as toxic and damaging.

“Study after study has shown that people who feel lonely, depressed, and isolated are many times more likely to get sick and die prematurely – not only of heart disease but from virtually all causes – than those who have a sense of connection, love and community,”

Ornish, the founder, president, and director of the nonprofit Preventive Medicine Research Institute in Sausalito, Calif., and the author of Love and Survival, points out that today many people don’t have an extended family they see regularly, or live in a neighborhood with two or three generations of neighbors. Many don’t have a job that promises stability or go to a house of worship every week. “These things affect our survival to a much larger degree than people had once thought,” he says.

Unfortunately, says Ornish, “many people think of these as things you do after you’ve done all the ‘important’ stuff,” such as diet and exercise. What winds up happening is people often regard spending time with family and friends as a luxury. “What these studies show us is that this is the important stuff,” Ornish says. “We are touchy, feely creatures, we’re creatures of community, and we ignore these things at our own peril.”

Raising awareness so that people who are lonely and depressed can face these problems is very important, says Ornish. “It’s very hard to get people even to take their medication, if you don’t address these issues. That’s where awareness is the first step in healing. If a physician can spend more time with their patients talking about these issues, these people can begin to make different choices in their lives.”

Depression and the Heart

“The general results of studies are that, for the most part, we believe depression is a risk factor for the development of heart disease,” says Matthew Burg, PhD, associate clinical professor of medicine at Yale University School of Medicine and Columbia School of Medicine.

Burg points out that in people who have already suffered a heart attack that requires surgery to unclog blocked arteries, depression is also associated with poor outcomes, such as an earlier death or subsequent heart attack.

Social isolation and low levels of social support are similarly associated with increased risk for heart disease complications, he says.

Talking About Your Emotions

Not surprisingly, people have an easier time discussing their blood sugar and cholesterol than speaking about their psychological state. “People don’t like being depressed but, in our society, there is a certain stigma about things like depression,” Burg says. “When patients are not as forthcoming about these issues, it makes it that much harder to identify and treat.”

“A person who has suffered a heart attack is likely to say things like, ‘Of course I’m depressed, I just had a heart attack,'” Burg says. “But very often, when we take a closer look, what we find is the symptoms of depression predate the heart attack.

“The depression after a heart attack, which we would call an adjustment problem or adjustment disorder, actually dissipates within a matter of weeks. If the symptoms persist, we’re really talking about a depression independent of the heart disease.” These emotions, when prolonged, “are worth paying attention to, because of the potential effect they’re having on the cardiovascular system.”